by heruca
To Jerome, or Joshua:

Would it be OK if I post a link on these forums to let people know of my current Kickstarter campaign? It's relevant to people with an interest in playing boardgames online.

Please respond soon, as the campaign ends in just 6 days. Thanks!

by heruca
OK, only 4 days remain in my Kickstarter, and Joshua didn't object, so I'm going to go ahead and post this. Jerome, please delete this thread if it bothers you.

I am posting here because I know it's a crowd that enjoys online gaming. I develop Battlegrounds Gaming Engine (aka BGE), a virtual tabletop program for boardgaming, along similar lines as ZunTzu, but commercially-sold rather than free, and one that is still being actively developed and supported.

At the moment, I have made BGE free for anyone to use, fully unlocked, in case they want to "test drive" the program and perhaps try their hand at making their own game conversion (ie, modules) with it.

There's a video tutorial that walks you through the entire process of porting a game to BGE. The process is really quite simple, and BGE should prove to be an empowering toolkit. Familiarity with image editing apps is a plus, but you'll never have to mess with scripting or XML editing, nor need to create spritemaps of your game components beforehand.

Should someone try it out and like the program enough to want to buy a license, there is currently a significant discount on the BGE license that comes with 7 free Player Slots (that many players can join and play with just the free BGE Demo). It's available during this Kickstarter campaign for just $17 (regularly $30). Just be aware that the campaign ends in 4 days.

If you've got a favorite ZunTzu (or even Vassal) module you'd like to port to BGE, you can generally just rename the module file to be a ".zip", open the archive, and extract the component images to place in the corresponding BGE folder. There may be occasional exceptions, as I believe some modules are encrypted to prevent this.

PS: Although Mac support was initially available for BGE, changes to Mac OS X in recent years mean my software is no longer Mac-compatible (unless you're one of the few holdouts still running a pre-Lion version of OS X). So BGE is now Windows-only until v2 can be developed, which will be fully Mac compatible and Intel-native.
by Chobham_1980
Hi Heruca:

Thanks for the heads-up on the campaign.

Q: Most of my ZunZtu boxes have jpegs of complete counter-sheets; How does BGE 'punch-out' the counters?

Q: I watched the tutorial, very cool for CDG's; is there a known tutorial on traditional hex & counter games?

Thanks for the opportunity to review the software!!!

There's probably a free utility to break apart objects that are laid out in a perfect grid (such as a complete countersheet), and/or Photoshop might have a feature for this.

I've generally done it manually. This tutorial video shows my method (go to the 2:30 mark). I'm using that technique to cut out cards, but the same thing could apply to counters.

More and more, I'm able to use a utility like FileJuicer to extract individual images from a PDF. Saves me from having to go through the "cutting apart" process.
by Chobham_1980
Hi Heruca:

Thanks, I'm leaving out-of-town for a few weeks - - I'll review in more detail after coming back.

I've never heard of file-juicer; interested to see what it can do!

by heruca
Last night I found a better way of punching counters from a sheet, using Photoshop. It involves the slice tool. I'll have to make a video tutorial when I get a chance.
by heruca
Take a sneak peek at the new features coming in BGE v1.8 (due for release in late August).
by heruca
For anyone looking for a replacement for ZT or ZT2, this should be of interest. 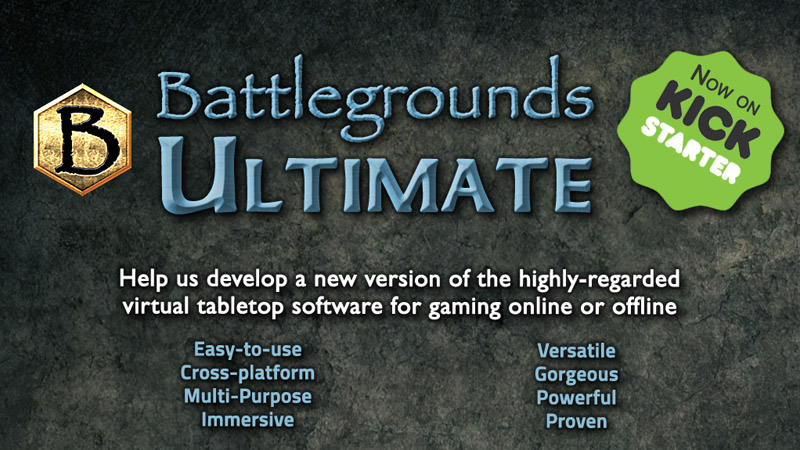 The goal of this Kickstarter campaign is to fund the development of the next generation of Battlegrounds virtual tabletop software, which will be called "Battlegrounds Ultimate" (aka BGU).

This "new" virtual tabletop isn't starting from scratch. It builds upon the ten years of development that went into the first generation of the software (BRPG). This project should be of interest to anyone with an interest in RPGs (it supports both remote play and face-to-face game sessions). Among other worthy goals, a successful campaign will help Battlegrounds restore full support for Macs.

OK, so far, not particularly interesting to boardgamers. However...

If the first Stretch Goal can be reached, Battlegrounds Gaming Engine (BGE) will also get the v2 treatment, providing a great new virtual tabletop app specifically tailored for boardgamers. If this happens, a new Pledge Level will be added to allow existing BGE users to upgrade to BGU(ie, pay a modest upgrade fee without having to purchase a license at full price).

If the second Stretch Goal can be reached, it will add a "free-to-play" mode, where anyone can use the BGU app without a license (albeit with a reduced feature-set), and that will mean LOADS more users, making it much easier to find extra players for your games. A BGU Gamer license will still be required to create digital boardgame conversions, but simply playing games produced by others will be absolutely free.

Please check out the Kickstarter campaign page to learn more. At least watch the brief 2-minute video, which is pretty cool.
by heruca
BGE is currently free to use (no license required). Details and download links are posted here. If you’ve been curious to try out the fully-unlocked software, take advantage of this opportunity. The promo lasts about 4 weeks.

After you've downloaded the BGE software, I suggest you browse through the free games listed in the Battlegrounds DLC Gallery, find one you like (or want to try), gather some friends, and have play away.

Once you're comfortable with the basic workings of the software, perhaps try your hand at putting together some digital game conversions of your own. The video tutorials here should help guide you through the process.
by heruca
Sadly, it doesn't look like this KS campaign is going to fund, unless it gets a big boost real soon.

Too bad, I was really hoping to be able to offer a free-to-use virtual tabletop for boardgaming where publishers could offer officially-sanctioned ports of their games, either as free demos to promote physical sales, or as commercially-sold downloadable content.
All times are UTC
Page 1 of 1